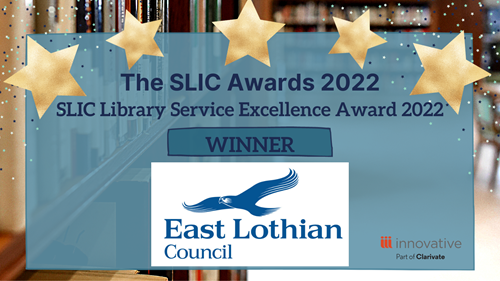 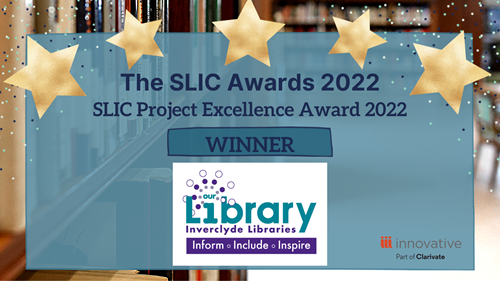 East Lothian Library Services and Inverclyde Libraries have both been recognised for their outstanding contributions to their local communities at the 2022 SLIC Awards.

The two library services picked up the top awards at the SLIC Showcase and AGM on Friday 28th October which were sponsored by Innovative.

The awards recognise the commitment, creativity and value libraries across Scotland offer the people and communities they serve, acknowledging exceptional innovation and service design between the period from June 2021 to June 2022.

SLIC Chair, Professor Ian Ruthven, who led the awards judging panel said the quality of entries for the 2022 competition had been exceptional.

He said: “We were all really impressed by the range of innovations and commitment to local communities shown by the nominations. What was characteristic of each of the entries was this strong relationship between libraries and their communities; identifying local needs, working with communities to use the skills of libraries and library staff to improve people’s lives, and putting libraries at the heart of their communities.

“So often when reading the entries, we thought ‘only a library can do this’. Last year we found it hard to select a winner, so this year we created two awards, one for ‘Project of the Year’ and one for ‘Library Service of the Year’. This only made it harder…so for the first time, we have a winner in each category and a highly commended award. Huge congratulations to all involved.”

East Lothian’s Library Services entry described their commitment to involving the whole community, notably through the creation of two new Community Librarian posts. The entry also highlighted clubs, events, author visits, imaginative use of digital and other activities which together delivered a thriving local library service.

The service has 12 local branches, six secondary schools, a local history centre and a Library HQ. Between July 2021 and June 2022, the service welcomed 4,584 new members and facilitated 243,538 loans (an increase of 60 per cent from the previous year) across local sites.

Shetland Library was Highly Commended in the Library Service Excellence Award category for whole service renewal. This included a new library building and a major consultation on mobile library delivery – with service level use now higher than pre-COVID times.

Inverclyde Libraries’ entry to the Project Excellence Award focused on sustainability and their aim to stimulate long-term public engagement in the lead up to and following COP26. It was described as ‘inspirational’ in the way in which it grew the sense of community.

It linked the ‘local’ to the ‘global’ through author events, involving members of the community, including those in the prison population who are not often included in climate conversations, and contributed to the circular economy through lend-and-mend hubs.

The judging panel felt the project was ‘a powerful and cohesive project that acts as a model for others.’.

Aberdeen City Libraries was Highly Commended in the same category for their range of activities to improve the lives of young carers. This included initiatives co-designed with young carers such as zine and stop-motion animation workshops and the creation of a specialist library collection.

The 2022 Awards were open to all SLIC members, with the winners receiving a trophy and cash prizes for their success. The Judging panel included SLIC Chair Ian Ruthven, Writer, Fundraiser and Chair of the Edinburgh UNESCO City of Literature Trust Ruth Plowden, and Catherine Salmond, Editor of The Herald.