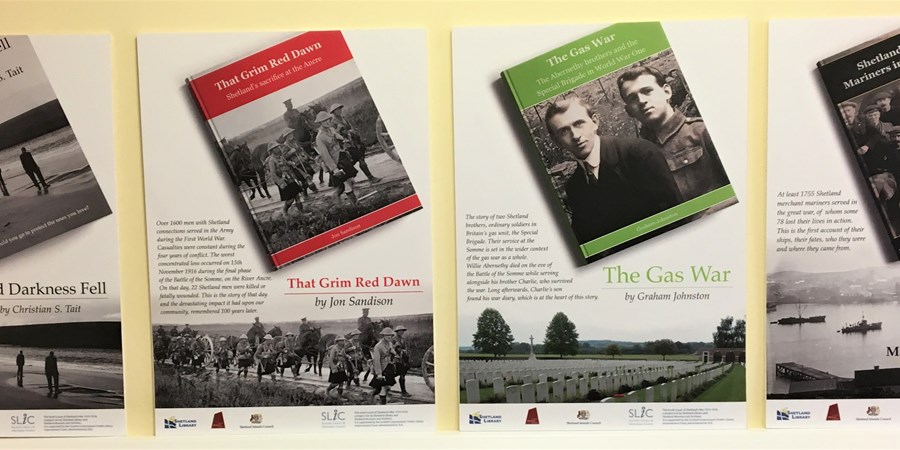 This month on the SLIC PLIF blog Karen Fraser - Executive Manager, Library Services, for Shetland Library - talks about Shetland’s War – a unique project which looks at Shetland’s role in the Great War. The project received funding from the Public Library Improvement Fund in 2017.

Our Shetland’s War project supported volunteers to research and publish accounts of Shetland’s role in the Great War. The project aimed to increase engagement and interest in this part of our local history by running a series of varied events. We also wanted to produce short and attractive books that would be picked up by people not normally drawn to the topic. The project supported the Reading, Literacy and Learning strand of Ambition & Opportunity: The National Strategy for Public Libraries. We worked in partnership with our Shetland Museum and Archive colleagues who helped edit and quality control our books.

With the help of Museum and Archives, we quickly had dedicated and committed volunteers on board. Final selection of the topics for the books was difficult, but our researchers had already worked on interesting strands and just needed to develop them. Our first book was ‘The Gas War’, a poignant account of two Shetland brothers who served on the Somme. It was based on original diaries provided by Charles Abernethy, the son of one of the brothers, who visited Shetland and worked closely with our author, Graham Johnston. One of the most humbling moments of the project was being able to hold in our hands the original diary which had been at the Somme 100 years ago.

Most Shetlanders who served did so at sea, and another volunteer, Laughton Johnston, was doing research on crew lists to tell the story of Shetlanders serving in the merchant navy. Through our project he was able to turn this into a book, ‘Shetland Merchant Mariners in the Great War’ which was a small but very important start on researching a massive piece of Shetland’s history. The hope is that it will encourage more people to tackle this subject.

The third of our planned books was ‘That Grim Red Dawn’, telling the story of the Battle of Ancre when 22 Shetlanders lost their lives in one day. Concentrating on a single day like this lent itself to a short book with a big impact, and was a good way to rein in our enthusiastic researcher, Jon Sandison, who wanted to tell the entire history of the war and more! He put in huge energy, unearthing ever more information around the men who fell that day and involving many descendants in his project. 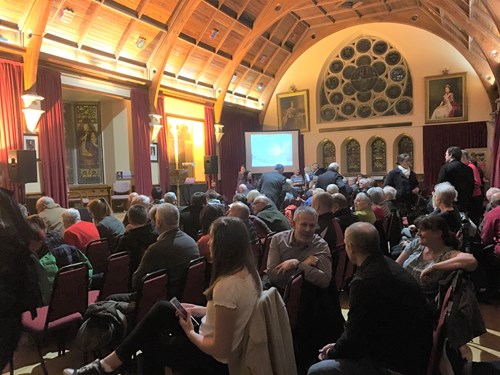 I say the third of our planned books, because our project expanded when we got wind of the manuscript of a novel that a local poet, Christian S. Tait, had been working on for many years. This turned into ‘And Darkness Fell’, a story based round a family in wartime Lerwick. We thought it very much complimented the aims of our project to publish a fiction account which would appeal to a wider readership, and bring some of the history alive.

Our project did have a somewhat exhausting schedule and also started overrunning – both SLIC and our printers were patient with us! We ran a chain of events which were all well attended, and by varying subject, format, time and location we got different audiences to each. Content included poetry, music, lectures, readings, youth theatre, film and talks, culminating in some great book launches. Our final launch packed out the Town Hall and included excellent local music including a specially commissioned fiddle tune for those who fell at the Ancre. By this time the project had its own impetus as so many people were being drawn in by the efforts of our volunteers.

Among the outcomes were - a rewarding experience for our authors, a contribution to Shetland’s written war history, engagement and ongoing interest from hundreds of people and a successful partnership with our Museum colleagues. All the books were in our ‘most borrowed’ local book chart of 2018, as were several other war publications, showing how interest in the subject grew. We have also had good sales of the books (we could keep them very affordable due to the grant funding) and we have offered free copies to all Scottish library authorities, and to other libraries round the world. Our project and publications will be part of a First World War legacy commemorating Shetland's war.

This activity made the war feel very close – our work brought home to people how it had affected our families and community. The final word should go to 85 year old Charles Abernethy - “Before last year, scarcely anyone, other than my own immediate family, knew even of the existence of my father's war diary. The Shetland Library's decision to publish a book built around that diary has brought a great change. Far more people will now know, not just about the little diary itself, but about the entire context and impacts of the gas warfare. Those people will be not just in Shetland, but far away, in Australia and New Zealand and many other places where families of Shetland origin will learn what happened.”

* You can find out a little more about the Shetland's War project by visiting the Shetland Library Website. You can also view a short video of the final book launch at Lerwick Town Hall.