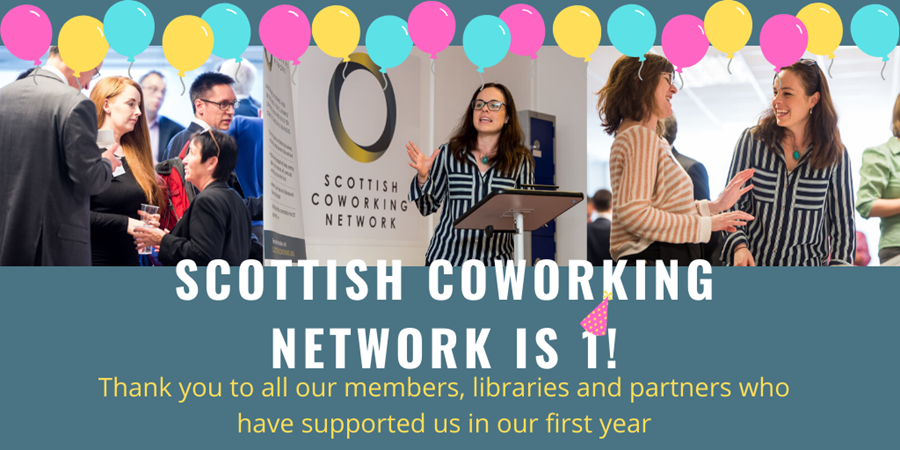 The Scottish Coworking Network celebrates the first anniversary of its official launch today.

Exactly a year ago, the not-for-profit network developed by the Scottish Library and Information Council, with funding from the Scottish Government, was launched at Edinburgh Central Library by MSP Kate Forbes, the Cabinet Secretary for Finance.

Since then the Scottish Coworking Network has opened five hubs in public libraries throughout Scotland – welcoming 100 start-up businesses and entrepreneurs as members.

SCN offers professional, affordable coworking office space in local public libraries based in Dundee, Dunfermline, Edinburgh, Inverness and Troon. Each hub is equipped with everything a fledgling business needs, including break out areas, meeting facilities and WiFi.

Membership starts at just £42 per month for a hot desk and £60 per month for a fixed desk. There are also no long-term contracts, with all memberships being offered on a rolling basis.

The coronavirus may have temporarily stopped members accessing facilities, but SCN is hopeful it won’t be long until their thriving hubs are open once more.

SLIC’s Head of Programme Lindsey Henderson explained: “We’re delighted to celebrate the first anniversary of the Scottish Coworking Network’s official launch. It’s amazing to think that over the last year the network has supported 100 start-up businesses and entrepreneurs throughout Scotland.

“SCN offers professional and affordable coworking office space in five centrally located libraries throughout Scotland. We know that many people starting their own business or running small operations use public libraries as a way to escape the distractions of the kitchen table and access the wealth of resources available at the library. This is often also a solitary endeavor, so to see so many members use dedicated space with like-minded company is fantastic."

Pamela Tulloch, the Chief Executive of the Scottish Library and Information Council added: “The way people work and the role libraries play in this has been changing for some time. SCN hubs offer access to modern, coworking office space which is local, affordable and flexible. When restrictions ease, these hubs could provide start-ups and entrepreneurs with the office space they require to see their businesses flourish.”

For more information on the individual hubs, visit the Scottish Coworking Network website. You can also contact the SCN team by emailing scn@scottishlibraries.org