Get On Board with Library Gaming 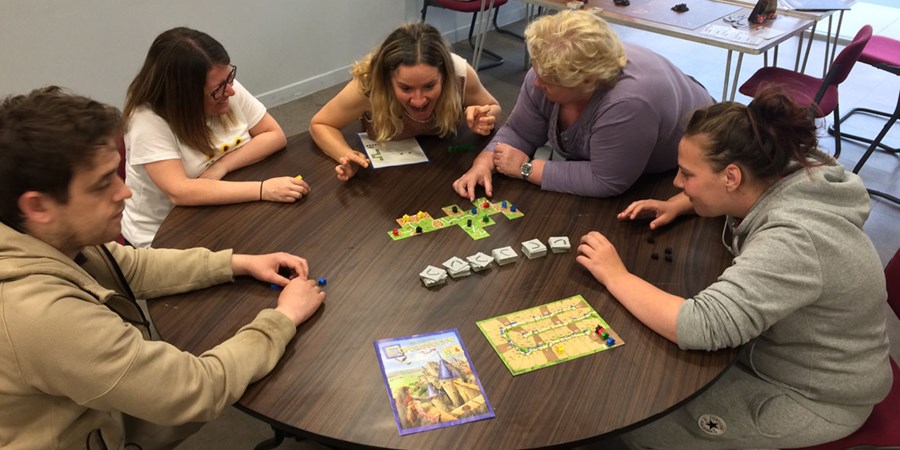 In this month’s PLIF blog Libraries Development Coordinator Elaine Finlay talks about Renfrewshire Libraries’ Get On Board project. The PLIF funded initiative looked at how to encourage young teenagers to engage with library services.

We applied for PLIF funding in order to introduce board game activity sessions called Get On Board in three of our libraries – Foxbar, Glenburn and Johnstone.

The project aimed to increase the social skills, self-confidence, cognitive skills and self-esteem of young people aged between 13-17-years-old within Renfrewshire as well as enhancing their relationships with peers. Through the group sessions we also hoped to tackle the low uptake of library services amongst this age group.

To this end we created a temporary position of Games Champion who would develop, market and lead the games sessions. Advertised internally, we wanted to retain the knowledge gained for future sessions outwith the scope of the initial project. We soon found that although our project audience was intended to be between 13 and 17-years-old, the majority of participants were between eight and 12-years-old.

The difficulties in the practical application of board game sessions also became clear, particularly around timing. For example, we soon found that Saturday morning sessions didn’t work for any of our locations. Towards the end of the project we facilitated a games session within a local high school library where we had significant success in reaching our intended target audience.

As a direct consequence, we started Get On Board lunchtime sessions in two of our local high school libraries. The goal of this stage was to see if we could entice the captive school audience into their local library, at evenings or weekends, to set up gaming clubs.

However, although we interacted with over 200 young adults of the target age during the school week, we found this did not translate into participation in local public libraries at the weekend. Our experience indicated that, although we could compete with the school environment during lunch hours, competing at the weekend for the free time of this age range was a whole different matter.

Moving on from Get on Board

Moving on from the initial Get On Board project, we have recently been working with groups of teenagers whose interest has been indicated to us by other partners including, school librarians, local libraries, staff and the Scottish Mental Health Arts Festival. On the basis of this more simplistic model, we now have a Warhammer 40k group up and running as well as a group for socially isolated young people in the pipeline.

Without the initial opportunity presented by PLIF we would not have been able to arrive at this destination.