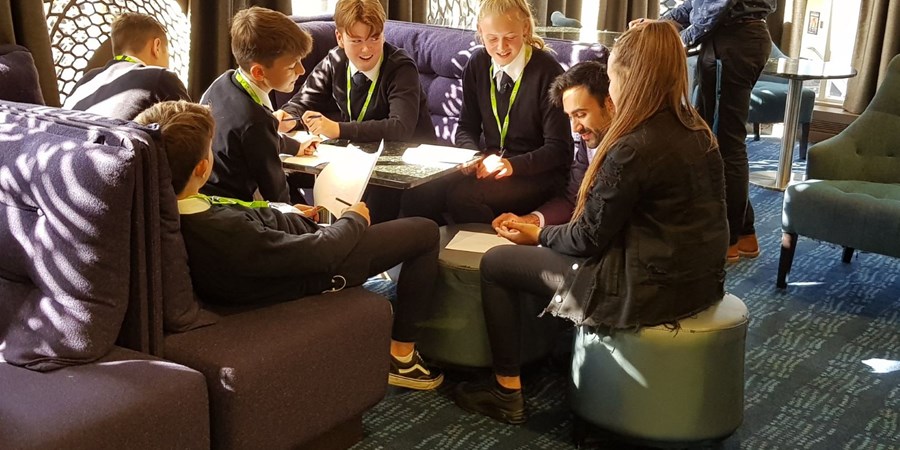 This month on the SLIF blog Agnes Guyon and Caroline Messer, Senior Librarians with East Lothian Council, talk about the East Lothian Literacy Festival, which received funding from the School Library Improvement Fund in 2017.

SLIF gave East Lothian School Librarians and Senior Librarians for Children and Young People in the area the chance to work together - delivering a creative approach to literacy with a new literacy festival.

Held on September 12th 2018, the Literary Festival was the culmination of a year-long programme of activities to mark the Year of Young People. We wanted the event to feel like a professional conference with workshops and keynote speakers, so that it felt very special for the pupils. Author Joe Coelho delivered a stirring keynote speech saying: “I want you to allow a space inside yourself for the dreams you don't yet know you have.”

We also wanted to have a mental health consultation on the support pupils would like (and which title could help) as well as graphic novel workshops for pupils and teachers.

After months of preparation, the BIG day was upon us. Workshops leaders and keynote speakers were booked and briefed, The Brunton was ready to welcome hordes of pupils for all our secondary schools, buses were booked, packed lunches organised, goodie bags filled, badges printed with workshop choices and rooms. We were ready to go!

Pupils attended three workshops in total – two before lunch and one after – having a choice of 14 options in total. It was a logistical nightmare to allocate workshops fairly but in the end, each pupil had at least one of their top two choices. Options were varied: Performance Poetry with Joe Coelho, Creative writing with Cat Clarke, Book Vlogging, Storytelling, Murder in a box, Graphic Novel illustrations, Zines, Art therapy with Debi Gliori, Nonsense poetry, as well as Have Your Say: Future Libraries and Have Your Say: School Library Website.

Given how busy it was, the event went amazingly well! The pupils were engaged and enthusiastic about the day. We asked the pupils to tweet under the hashtag #offtheshelf, and also asked for comments through a feedback form. Most pupils enjoyed it and many ask for it to be repeated. The most prevalent criticism was for the lunch arrangement – with many pupils preferring to go to a different venue, to be allowed to go out or free food! Teachers who attended the event also sent comments such as:

“Our vulnerable students who attended were obviously engaged and happy on the day. The boy (ASD) who read his poem at the end had a lot of positive feedback in school as a result, with members of staff surprised and happy for him: a great achievement for him. Others were interviewed for the video and reported that their families had watched it and were pleased for them. The member of staff who supervises a group of vulnerable students told me that she’d had positive feedback from the students too.”

“I’ve spoken to a number of students who attended and all said it was an enjoyable day. Some also asked if another one was planned and hoped there was. Everyone I spoke to was hugely enthusiastic and I got the impression that this event was perceived as something very special.”

“My impression is that the students enjoyed it tremendously, found it exciting and stimulating, and that because it was accessible to all, everyone who attended felt confident and had a sense of real achievement.”

“The Head of Pupil Support reported back on the pupil who had read his poem out. She had called his Mum and read it out, she was in tears.”

Such events need a lot of planning and we are considering running a scaled-down version of the Festival, using the feedback of the first event to maximize its impact, for example reducing the number of options. As well as the obvious benefit for the pupils, in terms of enjoyment, engagement, learning and motivation, the day also brought pupils from different schools together. Cooperation between the schools and the library service was key and the team became closer as a result of working together so we also learnt a lot in the process. Thank you to SLIC for giving us this opportunity.