Admin & Finance Officer Morag Andrew celebrated 20 years with SLIC this year, making her one of the longest serving employees of the organisation.

Morag joined the Scottish Library and Information Council on April 12th 1999 when SLIC and CILIPS were based in John Street in Hamilton. As one of only four staff, Morag was used to multi-tasking and one of her duties was preparing the CILIPS magazine for distribution across Scotland. It was a case of all hands on deck to make sure everyone got their delivery on time.

Morag said: “All of us helped with the magazines and there were thousands of them! We had to physically put the stickers on ourselves before sorting them into different areas. We were always surrounded by mailbags. Thankfully, the job was eventually outsourced much to all our relief.”

The Development of SLIC 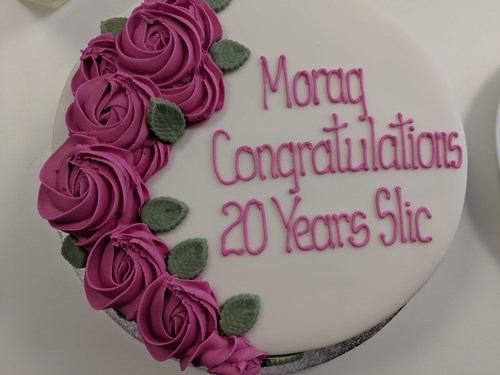 Since then, Morag has watched as SLIC has grown from small beginnings to the organisation it is today. During her time with SLIC Morag has witnessed the launch of many groundbreaking strategies and frameworks including Ambition & Opportunity, Scotland first public library strategy, and Vibrant Libraries, Thriving Schools – Scotland’s first school library strategy.

A familiar face to many SLIC members, she has also helped at many SLIC events including the annual AGM and showcase. Thanks to SLIC’s continual growth Morag has even witnessed four office moves over the years.

Morag said: “We originally moved to another office in Brandon Gate in Hamilton before coming into Glasgow and since then we’ve moved another twice. Things have changed over the years but the one thing that has remained constant is the long standing friendships I’ve made. I enjoy my job and learning new things along the way.”

To mark her momentous achievement Morag and the SLIC team enjoyed a celebration lunch last week where Morag was presented with a jewellery voucher, cake and flowers.