The Big Scottish Book Club is back for a fourth series and producers are now looking for Scottish book lovers to get involved.

The BBC Scotland programme features Scottish writer Damian Barr interview some of the biggest names in fiction, non-fiction and poetry. In a change to the previous format, avid readers will have the opportunity to talk about their favourite books, the writers they are passionate about or to give book reviews. The show will also head out to different towns and cities throughout Scotland to hear from people on the street what their favourite reads are.

How To Take Part 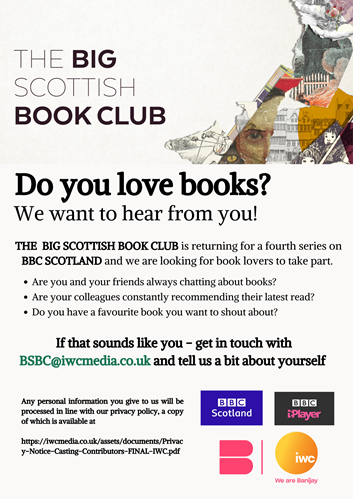 Damian Barr said: “2022 is Scotland’s Year Of Stories and I am thrilled that The Big Scottish Book Club will return for a fourth series among the celebrations.

We are bringing the audience at home right into the heart of the show by making it even cosier and more conversational. This next chapter is exciting, and I hope it brings even more viewers and readers to the show.”

The popular series was first introduced in 2019 and is produced for BBC Scotland by IWC Media. They would like to hear from book lovers and avid readers throughout Scotland who would like to take part in the new series.

Gareth Hydes, Commissioning Editor at BBC Scotland, added: “We are delighted to have a fourth series later this year, with just a few tweaks to the format. Viewers love The Big Scottish Book Club and Damian for the warmth, intelligence but also accessibility of the series and that very much remains the core of the show.”

Anyone interested in taking part in the fourth series of The Big Scottish Book Club can email BSBC@iwcmedia.co.uk